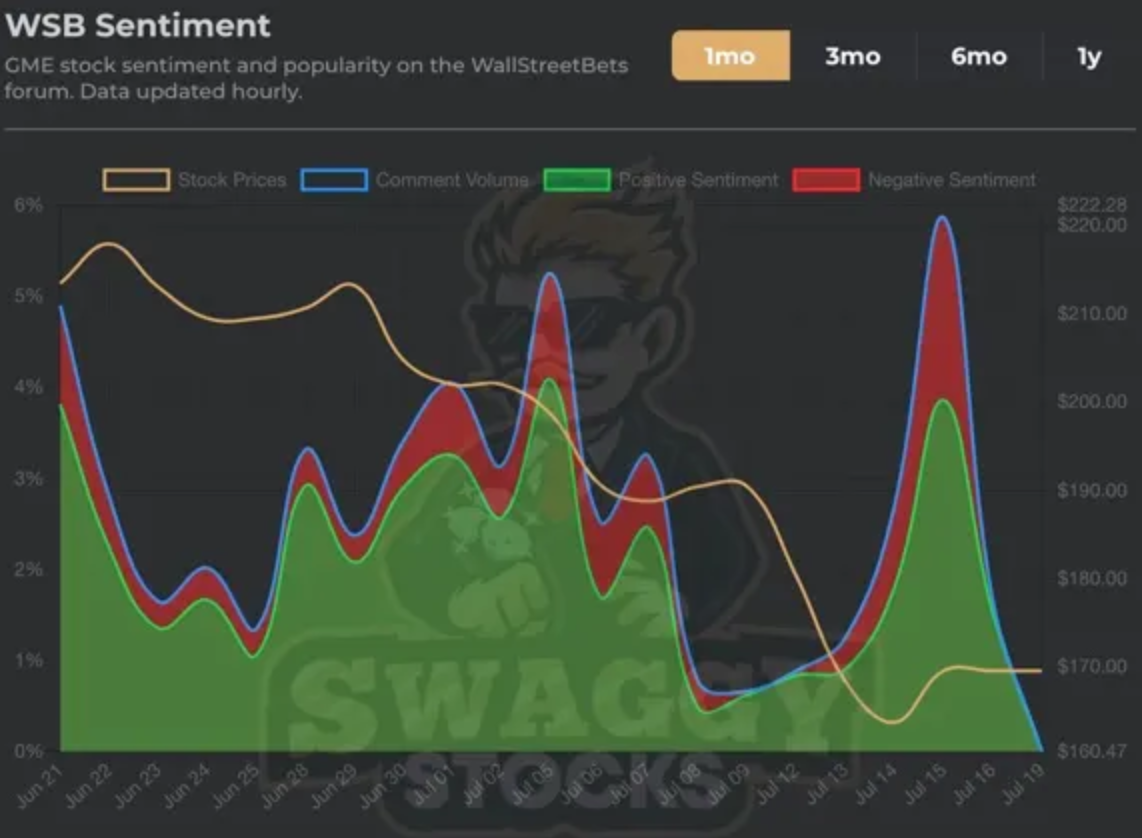 In recent days, news that GameStop would enter the NTF arena gained traction among apes and Reddit traders. Wall Street Memes discusses why this could be good news for the stock.

GameStop  (GME) - Get Report shares have been heading lower week after week since June 9. But the meme mania pioneer remains one of the most debated stocks among Redditors. Last week, on July 14, news of GameStop's NFT release bumped the stock’s popularity on WallStreetBets. See below.

Recently, news has surfaced that a GameStop NFT (non-fungible token) project was underway. Some investors and traders saw the development as a potential catalyst for the stock.

NFT is a single asset usually embedded in an object (like a video game skin, for example) and registered in a blockchain network. It is an encrypted digital record of a piece of art that can be bought, sold, and collected.

The news gained relevance after GameStop launched a website about NFT in the past few weeks. However, not much more information has been shared by the company so far.

Why NFT is relevant

NFT is a form of CryptoArt. The art pieces can take the form of a logo, a phrase, a song, and are published directly into the blockchain.

Below are some fun facts about CryptoArt:

Can GME benefit from NFTs?

GameStop has not yet offered details about the launch of its NFT or its strategy around it. It is safe to say that the company would benefit from diversifying its business model, expanding further beyond gaming and the brick-and-mortar channel – and that it is probably looking to do so with digital art.

The company is currently pushing to turn its fortunes around. CEO George Sherman left the company after failing to meet his goals – not before cashing insome of his GME shares at meme prices.

On the e-commerce front, GameStop has recently hired several former Amazon employees to improve the digital strategy. Billionaire Chewy co-founder and GameStop chairman Ryan Cohen seems to have the credentials to help overhaul GameStop’s operations, which has helped to keep meme mania alive.

Will GameStop succeed at turning its business around? Only time will tell. In the meantime, the Reddit crowd seems to be paying close attention, in hopes that the stock can surge once again.

GameStop shares have been well off their June 9 levels, and about 50% below the late January top. How confident are you that GME will revisit its previous highs?

The Rare Pearl Moon with Motion
Motion Version Part of my moon series. This super rare pearl moon has just washed ashore on a remote tropical island beach, fining one of these rare Jems is like a total worldly treasure! These moons, only fall to earth once in a few million years! When I found this one I felt the luck that is said to come with this pearl moon.

Dairygold
Aloha! I'm Dairygold. I'm often referred to as the Lisa Simpson of the group. It's not common knowledge, but my ancestry connects me to Nelson Mandela. Our friendship will be preposterous, despicable, and full of cantaloupe.

CryptoPunk #8857
The CryptoPunks are 10,000 uniquely generated characters. No two are exactly alike, and each one of them can be officially owned by a single person on the Ethereum blockchain. Originally, they could be claimed for free by anybody with an Ethereum wallet, but all 10,000 were quickly claimed. Now they must be purchased from someone via the marketplace that's also embedded in the blockchain.