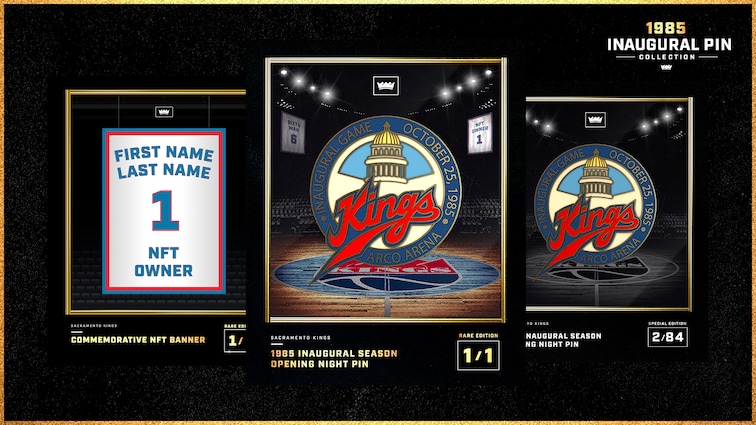 Today, the Sacramento Kings announced the franchise’s first-ever digitally designed Non-Fungible Token (NFT) depicting the 1985 commemorative pin given out in the inaugural season of the Kings in Sacramento and an industry first combination of the digital nature of NFT's, ownership, and representation in the real world.

“This NFT blends the digital and real world, signifying an iconic and memorable moment in our franchise’s history,” said Sacramento Kings Owner and Chairman Vivek Ranadivé. “This digital representation of our past connects to our proud future and provides the ultimate fan an extraordinary opportunity to unlock unique features and leave a mark on Golden 1 Center.”

Using the OpenSea platform and working with Manifold, the team is launching 85 NFTs portraying the 1985 inaugural season pin. Fans will have the opportunity to bid on one innovative and rare NFT that will feature the inaugural season pin and an on-chain customizable jersey banner.  The winner and ultimate owner of this NFT can customize the name and number on the banner. This customization will be updated on the NFT itself, as well as on the Kings website and inside Golden 1 Center. The auction winner will also receive a physical replica of the 1985 season pin and a pair of tickets to the 2021-22 Opening Night game in the first three rows. This NFT will be auctioned starting on July 22 and will close on July 26.

An additional 84 NFTs portraying the 1985 inaugural season pin will also be available for purchase. Fans will have the opportunity to purchase 84 of the NFTs and will receive a physical replica of the 1985 season pin and a pair of Lower-Level tickets to the 2021-22 Opening Night game.

All purchases and bids will require a MetaMask Wallet and an OpenSea account to participate and only Ethereum will be accepted. For more information and to purchase, visits Kings.com/NFT.

Since becoming the first NBA team to accept Bitcoin in 2014, the Kings have been at the forefront of incorporating blockchain technology across the business. In 2020, the team launched the NBA’s first Live blockchain-powered auction platform for authentic memorabilia with Consensys and Treum. In 2019, the Kings announced the NBA’s first blockchain-powered reward program in collaboration with Blockparty – an enhancement to the NBA’s first predictive gaming application, “Call the Shot.” Also in 2019, the Kings announced a collaboration with CryptoKaiju, creator of the world’s first vinyl toys powered by Ethereum and fully traceable on a public blockchain, to launch the first physical crypto-collectible in professional sports. In 2018, the Kings became the first professional sports team in the world to mine cryptocurrency and announced a charitable program, MiningForGood, that donates those funds to workforce development and training efforts in the community.

Additionally, the Kings were named the "most innovative company in sports" by Fast Company and “Most Tech Savvy Team of 2016” by Sport Techie and were a recipient of Sports Business Journal’s “Facility of the Year.”