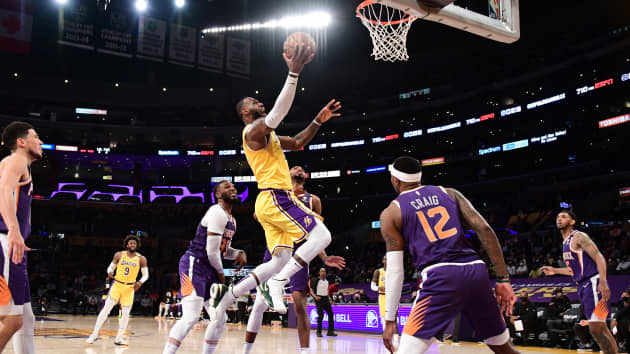 LeBron James #23 of the Los Angeles Lakers drives to the basket against the Phoenix Suns during the 2021 NBA Playoffs on June 3, 2021.

The new round values the Vancouver, Canada-based firm at $7.6 billion, according to a person familiar with the matter who preferred to remain anonymous as the information is not public.

The investment gives Sorare a valuation of $4.3 billion, the company said, making it by far the most valuable private tech firm in France and one of the largest start-ups in Europe.

NFTs, ornon-fungible tokens, are a new but fast-growing phenomenon in the crypto industry. They are digital tokens that represent ownership of a virtual item, such as a work of art. Ownership is tracked on the blockchain, a digital ledger of transactions.

Unlike bitcoin and other cryptocurrencies, NFTs aren’t fungible. This means they cannot be exchanged with one another like dollars or gold. Each NFT is unique and acts as a collector’s item that can’t be duplicated — however, the underlying media can still be viewed by someone else on the internet.

“When we think about the collectibles in the physical world, most of them have no utility value,” Nicolas Julia, CEO and cop-founder of Sorare, explained. “You put them in an album and that’s nice but it’s kind of limiting.”

“When you translate it to NFTs in the digital world, there’s many more things which you can do, like using them in a game for instance. But you also have provable scarcity, which is very appealing to collectors.”

Prices of NFTs spiked earlier this year, with sales reaching a record $2.5 billion in the first half of 2021. High-profile transactions include arecord $69 million artworksold by digital artist Beeple at a Christie’s auction and the$2.9 million sale of the first-ever tweetby Twitter CEO Jack Dorsey.

The huge sums of money flowing into firms like Dapper Labs and Sorare highlights how investors are chasing the next big thing in crypto.

Crypto and blockchain start-ups have received about $19 billion in venture funding so far this year, almost triple the $6.4 billion raised by the sector in 2020, according to figures shared with CNBC by data firm Pitchbook.

However, like other assets in the fledgling crypto industry, NFTs have proven vulnerable to abuse by bad actors. Last week, digital collectibles marketplace OpenSea disclosed thatinsider trading had occurred on its platform.

NFTs enter the world of sport

Several sports organizations are turning to NFTs and other crypto assets as a way of making additional revenue.

Dapper Labs’ NBA Top Shot platform lets users trade and collect basketball match highlights in the form of NFTs. The highlights, or “moments,” are licensed by the NBA, which receives royalties on each transaction.

Dapper Labs also developed its own blockchain designed for NFTs, called Flow. It had previously used Ethereum but shifted away from that network after its popular digital pet game CryptoKitties in 2017 led toslower transaction processing. It’s currently in the process of migrating CryptoKitties to Flow.

In addition to announcing its latest funding Wednesday, Dapper Labs unveiled a partnership with LaLiga, Spain’s top soccer league, to introduce a similar experience to NBA Top Shot for soccer fans. Dapper Labs says it plans to invest part of the fresh cash into new experiences, like paid trips to big games.

“Part of this funding will go toward expanding functionality on NBA Top shot, developing a mobile product, and connecting the digital collecting experience with the experience of a fan showing up to a live game, or even supporting their team on social media,” Roham Gharegozlou, Dapper Labs’ CEO, told CNBC.

It comes a week after LaLiga announced aseparate partnership with Sorareto add digital player cards from the league.

Sorare is also upping its rivalry with Dapper Labs, planning to expand into the U.S. with a new office on the ground. Sorare has been approached by a number of U.S. sports organizations, its CEO told CNBC.

Sorare also plans to launch a mobile app and have all of the top 20 soccer leagues signed up by the end of 2022. Both Dapper Labs and Sorare indicated they hope to take advantage of sports stars’ huge social media followings to get the word out about their platforms.

CryptoPunk #6649
The CryptoPunks are 10,000 uniquely generated characters. No two are exactly alike, and each one of them can be officially owned by a single person on the Ethereum blockchain. Originally, they could be claimed for free by anybody with an Ethereum wallet, but all 10,000 were quickly claimed. Now they must be purchased from someone via the marketplace that's also embedded in the blockchain.