As co-founder of a website tracking the spectrum of digital collectibles, Gauthier Zuppinger has seen it all. Drawings of toads, apes, abstract blobs, octopuses on heads, fire-breathing devils, and more.

Since last month, asnon-fungible tokenssupplanted meme stocks and minor coins in speculative imaginations, his website has added 169 collections -- more than the prior 12 months combined. For anyone convinced they possess an investing edge to become the industry’s Warren Buffett, the chief operating officer ofNonfungible.comhas a word of warning.

Last week’s $24 million Sotheby’s auction of ape tokens, the $180 million Doge meme and other surreal superlatives from the summer of NFTs have all painted a pixelated picture of easy money. But the market is in fact a vast sprawl of varying investing outcomes, data compiled by Bloomberg show.

“It’s just really a tiny piece of the community and some extremely lucky or well-informed people,” Zuppinger, an early enthusiast of virtual worlds, said in reference to the market success stories.

One of the most prevalent investing outcomes: Getting stuck with something nobody else wants. In the 90 days through Monday, roughly 1.9 million assets were sold on the largest marketplace OpenSea. But about three quarters never saw another transaction.

For those that do find buyers, the market is dominated by high-profile, high-value works. The most actively traded 3% of collections accounted for 97% of all dollar volume.

The market’s more liquid corners have managed to ride the bullish wave, though even then the returns have been far from even. Among those with at least 100 transactions, 42% saw their average dollar price drop, while 39% doubled in value or more.

The data collected from OpenSea’s public application programming interface omitted some collections such as CryptoPunks and ZED RUN.

Now withvolumesslipping from peaks after Bitcoin plummeted last week, the question is whether this speculative boom will go the way of many others: Latecomers holding the bag as the self-reinforcing mania reverses.

It’sfar fromthe only top-heavy market with a handful of star assets, a whole lot of obscure duds and newly enriched traders claiming to have divined systems for outperformance.

But in their lack of any clear economic value, NFTs stand apart from other recent speculative fads. Anyone can mint a token, which essentially denotes unique ownership of an asset on the blockchain. 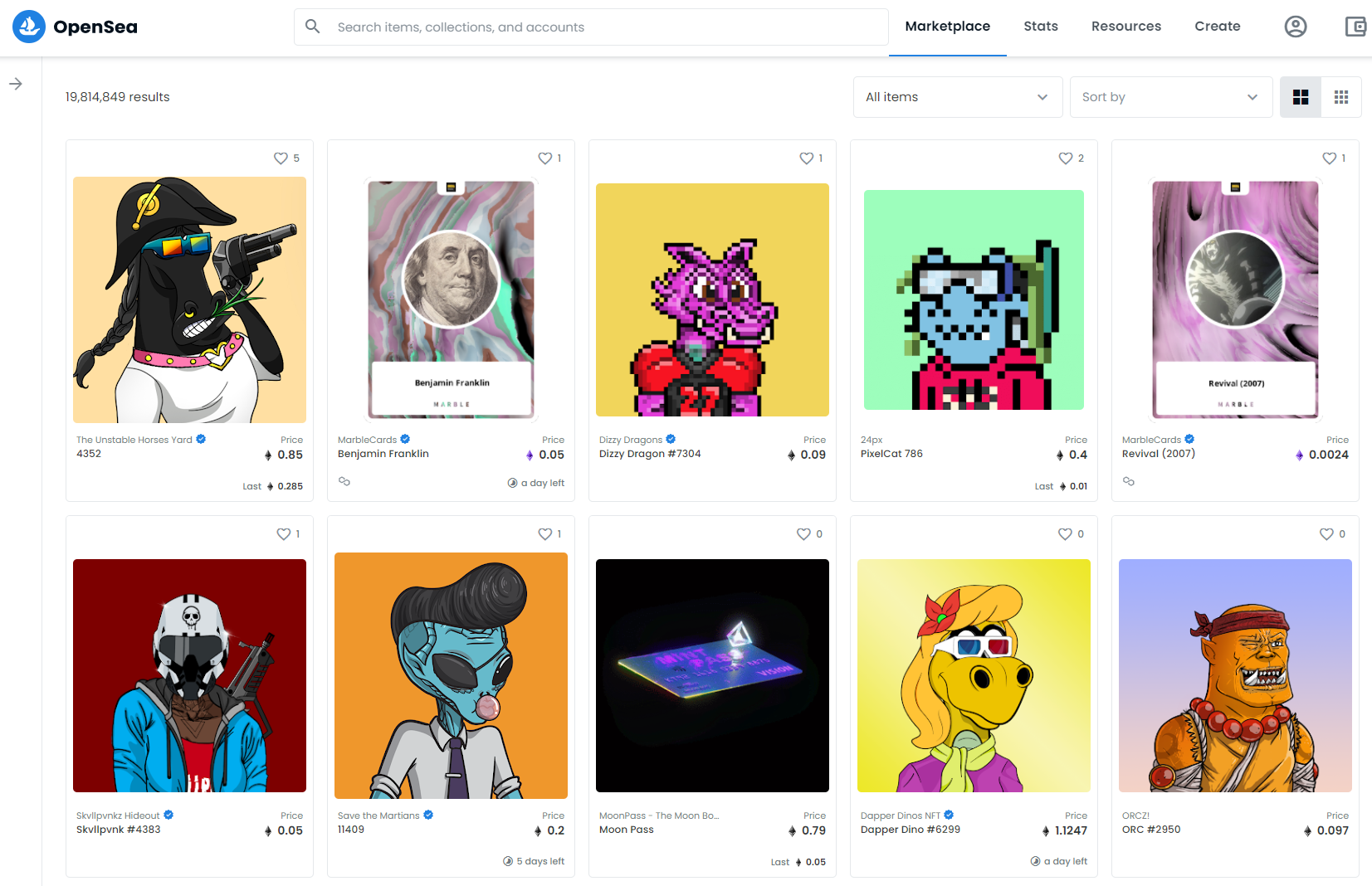 “Some of this is just the taste of the community,” said Benjamin Rameau, founder of a decentralized group investing in NFTs calledJenny DAO. “What the market decides is valuable sometimes is decided by weird factors.”

Herding is inherent to the game. Martin Gaspar, an analyst at crypto firm Crosstower Inc., flipped a digital portrait from the collection Hashmasks for about 40% in two weeks in February by watching what’s trending on Twitter. Now he sees NFT fans following Discord and Telegram groups for similar signals.

The advantages of being in-the-know was laid bare this week when OpenSeaacknowledgedan employee had used confidential information to snap up items before they appeared on the front page.

“Everyone’s trying to get into a big thing before it becomes really popular,” Gaspar said. “If there are notable crypto influencers who are talking about an NFT project, oftentimes it’s worth listening or at least taking a look at.”

Assessing the fair value of virtual koalas, vampires or eggs is so hard for most speculators that it’s become an arbitrage opportunity for algorithmic traders, who post lowball offers for a broad swath of works in the hopes of baiting unknowing sellers. The bots can then instantly resell the tokens at higher prices.

Grumbles over disappearing liquidity got louder when Bitcoin crashed as much as 17% on Sept. 7. Since then, NFT prices have also slipped along with volume. Loot (for Adventurers) -- among the hottest collections at the time -- has seen its floor price, or the cost of its cheapest piece, nearly halve. Relative to the record high, it’s down 54%.

“You’ve got a new NFT drop recently that’s been happening every two hours,” said Rameau. “There’s just no way you’ll have that many collections maintain value.”

Like the crypto world before it, NFTs have also been dogged by suspicions of wash trading, where a speculator inflates volumes by buying and selling against themselves. Nonfungible’s Zuppinger and Dan Kelly found that from May 2020 to February 2021, such fake transactions made up 28% of the dollar volume at an unnamed art marketplace, with another 10% flagged as suspicious.

The lower liquidity and unpredictable prices are partly the result of limited supply, which puts some collections under the sway of whales, or large holders. In the case of CryptoPunks, the 100 biggest owners currently own nearly half of all pieces.

One solution to the liquidity woes has been to fractionalize NFTs into fungible tokens that represent a share of a beloved collectible. That ease of trading can open up icons like the Doge meme to the masses, the pitch goes, but it’s also fueled the intense marketeuphoria: When the art collective that bought that image for $4 million publicly auctioned it in 17 billion virtual chunks this month, its total value surged to as high as $705 million.

“Ninety-nine percent is about being in the right circle, having the right information at the right time,” said Zuppinger. “In the NFT space, you live with this constant frustration that you have missed a chance to make $1 billion.”

He would know. Back when CryptoPunks could be bought for literally nothing in 2017, Zuppinger saw them as an experiment with little aesthetic value. Just last weekend, one token wassoldfor a cool $7 million.

persian/scarlet
Heyo! I'm persian/scarlet. I'm a Dogwalker by day, and I like riverdancing by night. When my owner isn't watching, I steal their oversized sweaters and use them for litter paper. I'm not sorry. I hope you like kitten around as much as I do!