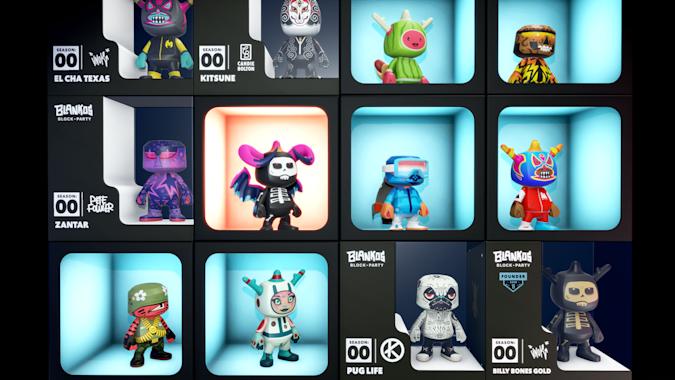 It may not sound exciting, but this could change the way games are played.
Mythical Games is proud of Blankos Block Party, sure. Co-founders John Linden and Rudy Koch are happy it’s found a substantial audience, and they’re pleased to partner with brands like Burberry and Deadmau5. They were super happy to receive an additional $75 million from investors this month, bringing their funding total to $120 million. But really, Blankos Block Party is more of a side hustle for Mythical Games. What Linden and Koch are actually selling is an ecosystem of NFT-driven gameplay and development.

Problem is, to the majority of Mythical’s audience, that sounds boring as hell. It’s much easier to sell Blankos, a colorful online world filled with user-created toys and cartoon vibes, than it is to push blockchain economics on a playerbase of kids and mainstream brands.

“Blankos is obviously the proving ground,” Linden told Engadget. “We control all the levers in Blankos, which is great, so we can do a lot of testing and really see what's hitting with the community. But the idea behind that is to tune it so that other games can use the same concepts.”

Blankos wasn't originally meant to be a full game. It started off as a tech demo, a way for Mythical developers to demonstrate their NFT marketplace to potential corporate partners. Blankos operates on the premises of accessibility, ownership and scarcity — it’s a free title where players can build game worlds with no coding skills required, and also collect, customize or sell NFTs of characters and objects created by developers and major brands. The Blankos themselves are squashy, Funko-esque toys, driving home the idea that they’re collector’s items, even though they’re completely digital.

That NFT marketplace is the heart of Blankos, and it’s what Mythical is actually interested in building.

The idea of selling in-game items for real money isn’t new, but the ownership that comes with blockchain technology is. There are existing marketplaces where players buy and sell game keys, digital weapons and rare cosmetic gear, though these operate on legally dicey ground. Players often don’t own the things they’re bartering — the game developer does. Counter-Strike: Global Offensive has a notoriously hot gray market, with players reportedly spending north of $100,000 for specific weapon skins.

Linden agreed and added, “When these gray markets pop up, they're not safe. You don't know if you're going to get the assets, there's a lot of fraud in these things, there's a lot of laundering, there's a lot of different things, and negative things have happened in these gray markets. And I think that's what we want to try and legitimize. We want to make that part of the game, part of the ecosystem, so you can design with that.”
When Mythical was showing Blankos to big brands roughly three years ago, the NFT industry was an odd, little-known space. This was ages before the Great NFT Boom (and Bust) of 2021, back when most folks were just beginning to hear about blockchain technology, mainly from the perspective of Bitcoin. Today, NFT marketplaces are so trendy they’ve become tacky.

“There's a new generation of collectors, right?” Linden said. “And the fact that they're willing to pay this money for tokenized JPEGs, which — we'll see what the value is, long-term, but I think what [the NFT craze] did show is it showed the mentality. It showed where consumer interest is heading, that they view digital assets as assets.”

To that end, Blankos Block Party doesn’t need to succeed. Mythical doesn’t even need to win over the Twitch chat, which was aggressively unimpressed by the Blankos presentation this week, during E3 2021. What really matters is major brands and players buy into Mythical’s in-game NFT ecosystem.

“The game doesn't have to be a grand slam,” Linden said. “We're not trying to necessarily take on Roblox, but what we're seeing is the community loves it. The community really loves what we're doing, the brands love where it's doing, so we're going to definitely invest heavily behind it, to really show this and show all these new concepts that we want to do. How does gameplay affect ownership? How can you play to earn? What does that mean in a game?”

Blankos entered Early Access this week, bringing along “several hundred thousand” players from a six-month beta. Brands and artists including Burberry, Deadmau5, Michael Lau and Quiccs have plans to release in-game items this year, and Mythical coordinated a Blanko NFT Twitch Drop for viewers of its E3 2021 show on Monday. More than 100,000 NFTs have been purchased in Blankos so far.

Long-term, Mythical is concerned with making sure its NFT economy is sustainable. Mythical isn't the only studio attempting to make NFTs a thing in gaming, but they've been working on this issue for years and they've hired people with expertise in live events, ticketing and financial systems. Eventually, if all goes to plan, the studio will transition into a distribution role similar to Valve or Epic Games, licensing out its blockchain technology and overseeing other studios’ game economies.

“Our primary focus is going to be bringing this technology to a lot of other game developers, and we're already in talks with quite a few to bring this into their worlds as well,” Linden said. “We'll probably have a few announcements later this year, for sure.”

Blankos is certainly no Fortnite or Roblox, but it doesn’t need to be. It just needs to sneak Mythical’s NFT concept into the gaming industry.
Arts

CryptoKitties
Hi-ya! Kitty #431061 here. I'm here to enjoy slappin' da bass and sweating through my feet. I was voted most likely to work at NASA in college. I think you'll love me beclaws I have cattitude.