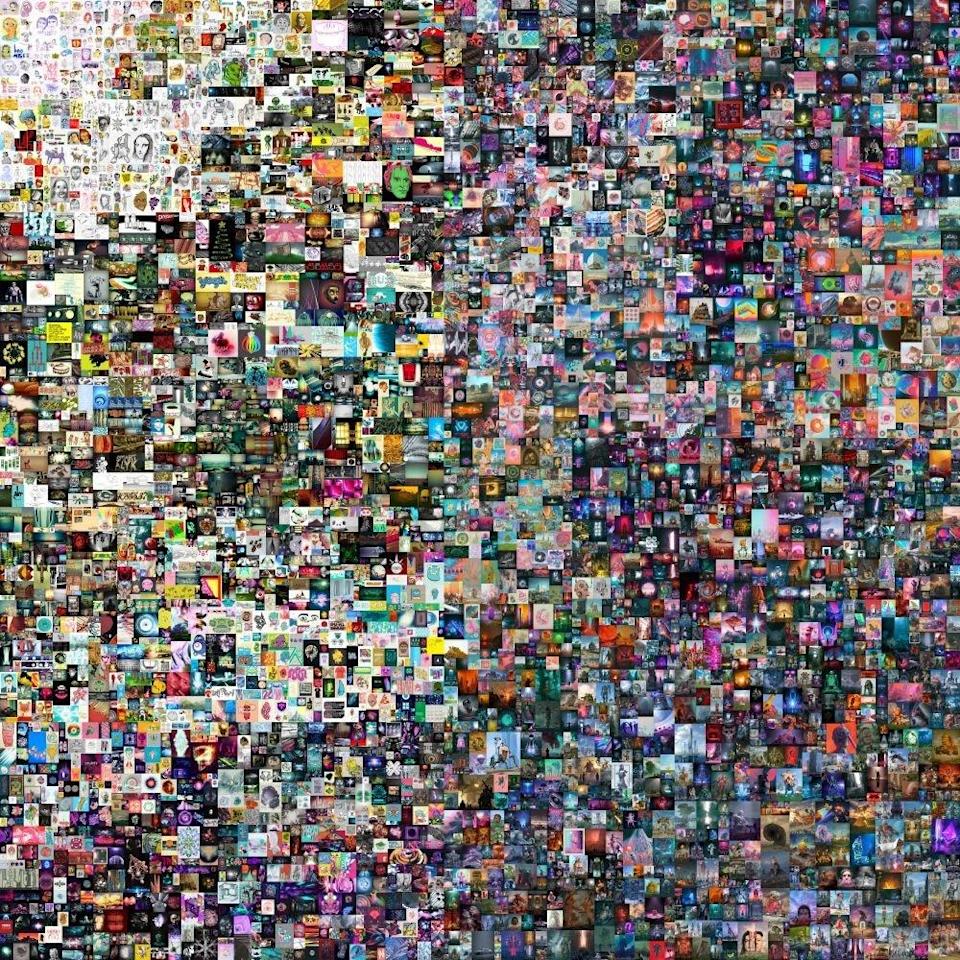 When Simon Gao, an engineer in China's eastern city of Hangzhou, decided to join a lucky draw to buy a "digital collectible" profile photo on Bilibili last Friday, he did not expect the process to be so difficult.

The video streaming platform set a high bar for potential buyers, requiring bidders to have logged into the site every single day last year. Gao qualified, but he was still unable to get a profile picture featuring cartoon pigeons, which is stored on the company's blockchain network.

Interest in the booming market for non-fungible tokens (NFTs) is as strong in China as anywhere else these days, but the Chinese government remains wary of the technology. This has led to an unspoken rule among mainland companies to ditch the term NFT in favour of the more neutral term "digital collectible". Many Chinese tech companies now offer their own digital collectibles on blockchains.

Do you have questions about the biggest topics and trends from around the world? Get the answers withSCMP Knowledge, our new platform of curated content with explainers, FAQs, analyses and infographics brought to you by our award-winning team.

Bilibili is the latest to jump on the bandwagon. It joins other tech giants - includingTencent HoldingsandAlibaba Group Holding, the owner of theSouth China Morning Post- in launching its own NFT trading platform after the market heated up in China late last year. JD.com, Baidu and Xiaomi also sell digital collectibles.

However, the sensitivity over crypto products in China has led platforms to limit how digital collectibles can be traded. Unlike NFTs sold on public blockchains around the world, those minted by Chinese tech firms cannot be resold for profit, a condition designed to assure Chinese regulators that the digital products will not become a tool for speculation and capital flight like bitcoin and other cryptocurrencies.

That has not dampened Chinese consumers' enthusiasm. Many new digital collectibles minted in China have been sold within seconds after launch.

"You have to be fast enough to get a digital collectible," said Felix Huang, a graphic designer in the southern tech hub of Shenzhen who has bought 10 digital collectibles. "If you fail to nail the NFT product 10 seconds after it's released, you've almost lost it."

The hype around NFTs revolves around linking digital artwork and other assets to unique blockchain-based tokens, allowing them to be collected and traded like physical assets. The technology is not explicitly banned in China, and authorities have embraced some uses of blockchain, such as protecting intellectual property.

Jingtan remains one of China's most popular NFT platforms. Since last summer, it has released dozens of different works as digital collectibles, including paintings, music, and 3D models of historical artefacts from museums. Each work has a limited quantity of NFTs available, usually under 10,000, which have sold out within seconds.

Wang Yongxu, an artist at a studio at Peking University, started minting NFTs for his traditional Chinese paintings last October and selling them on Ali Auction, Alibaba's built-in auction platform.

"Compared with Alibaba's auction platform, which only enables the sales of digital paintings, Jingtan has a unique advantage, as it releases various forms of products and has a wider user group," Wang said. He is open to adding works to Jingtan, he added, like many other young artists in China.

The combination of blockchain technology and the dominant mobile payment app Alipay has helped Ant Group gain a distinct advantage in NFTs, according to Stanley Chao, managing director of the US-based business advisory firm All In Consulting. China's ban on cryptocurrencies has also helped the fintech company.

On OpenSea, the world's largest NFT marketplace, most NFTs are sold on the Ethereum blockchain and bought using its cryptocurrency ether. The decentralised nature of open blockchains like Ethereum is anathema to Chinese authorities out of concerns for systemic financial risk. So digital collectibles in China are bought using yuan, with purchases on Jingtan happening within Alipay.

This is a core difference between how NFTs are sold inside and outside China, where companies mint their digital collectibles on private consortium blockchains. These blockchains are managed by a select number of organisations, said Ma Xin, secretary of the Institute of Electrical and Electronics Engineers' Digital Transformation working group. Unlike Ethereum or the bitcoin blockchain, these blockchains from China's tech giants are not open for the public to participate in and authenticate the data.

The differences partly stem from the regulatory environment in China, which has adopted a tough stance on crypto products. The Chinese government has declared all cryptocurrency-related activities, including mining and trading, to be illegal.

State media have also warned of risks in NFTs.People's Daily, the official mouthpiece of the ruling Communist Party, warned about NFT fraud in a commentary questioning the prices of digital collectibles. It specifically questioned the record-setting US$69.3 million sale last March of the digital photo collageEverydays: the First 5000 Dayscreated by digital artist Mike Winkelmann, known as Beeple.

Last Christmas Eve, though, the state-run Xinhua News Agency issued its own run of more than 100,000 digital collectibles, featuring news photos from throughout the year.

Given the sensitivity around crypto, tech giants have been cautious. Alibaba and Tencent started using the term digital collectibles last October. NFT platforms in the country have also banned second-hand selling. Ant Group said it does not welcome "private NFT trading" and has asked users to report any activity that violates its rules.

Gao, the Hangzhou-based engineer, owns three digital collectibles on Jingtan, including a 3D model of the torch for the 2022 Asian Para Games. He noted that the value of digital assets has so far been limited.

"Currently, the NFTs are just three photos to me. They can neither be used in any circumstances, nor can they be cashed in within the 180-day restriction for transfer," Gao said.

Jingtan allows NFT owners to transfer their assets to another party 180 days after the purchase. The second owner can transfer the asset after two years. However, selling the NFTs for money is still prohibited, and ownership is limited to mainland residents who are at least 14 years old.

Bilibili said it will launch a transfer function for its digital collectibles in the future. Tencent, JD.com and Baidu have no such function so far.

Black markets for second-hand digital collectibles have also emerged. Searching for "NFT" or "digital collectibles" on Alibaba's digital flea marketproduces no results, but searching for "Dunhuang" shows many potential buyers willing to spend about 3,000 yuan (US$470) on one of the Jingtan NFTs, over 300 times more than the original price.

Given the regulatory restrictions and the difficulty of snapping up NFTs as soon as they are available, Gao said he is thinking of giving up on buying digital collectibles.

"After all, what is the value of three digital photos that I can't sell?" he said.

This article originally appeared in the, the most authoritative voice reporting on China and Asia for more than a century. For more SCMP stories, please explore theor visit the SCMP'sandpages.

Alex in Wonderland
A figure, Alex, stands mostly naked in the midst of a physical and psychological maelstrom. He is clad only in nostalgic 80’s era socks, on a tenuous island between active waters and a variety of shark denizens. Sharks on the right side of the image are all beached, including a shark with a quartz crystal snout, an orange shark wrapped in a life buoy, and a shark further in the distance wearing an 80’s style shirt with the number “88”. On the left side is the largest shark, wearing bright glossy red lipstick and brandishing prominent teeth with braces. She is cordoned off from the figure by a roped float divider, and within her thought bubble is a warning symbol. Behind the figure, hovering in the air, are Grey aliens emerging from the distance, out of a series of elliptical UFO shaped interdimensional membranes. The Greys take on the visual form of spermazoa ostensibly impregnating the interdimensional thresholds. As is typical, these Greys inhabit a zone just behind the unconscious topology of Alex’s dissociative mind. Though Alex’s bottom half is representative, his top half mutates into a psychological cornucopia. In a manner akin to “Auto-Erotic Sphinx”, a predecessor work, the figure has self suctioned—an act of sensual infatuation, enjoyment, and exploration. Upward exists the figure’s primary conscious eye, adorned with a revolutionary beret emblazoned with a Bitcoin badge. The figure’s summit features the nose of a fighter jet facing off against video game Bullet Bills, one of whom is marked by a communist North Korean star. A cropped section of a UFO observes the contest. Alex’s mind branches both left and right. To the left is more singular embodied consciousness, manifesting two eyes and a Ganesh trunk grasping crayons. The right branch dissociates upward diagonally, emerging into an array of eyes, faces, teeth, tail, a unicorn horn, and much more—all of which participate in expressing his unconscious being; a democracy of psychic factions representing thought impressions and associations. All illumination and darkness– fernal, infernal, high consciousness and corporeal underbelly–reside in this realm. In the distance are relatively languid, light clouds, and against the firmament hovers a colossal distant eye peering over the scene and far beyond. This painting possesses underlying genetic traits with previous works such as “Auto-Erotic Sphinx with Toys”, “Dionysus”, and “Fuku-Shiva”. The work serves also as a nod to an earlier period of art inspiration during late teens and early twenties— born out of the nakedness, vulnerability, curiosity, and wonder inherent to coming of age and all subsequent psychedelic revelation.