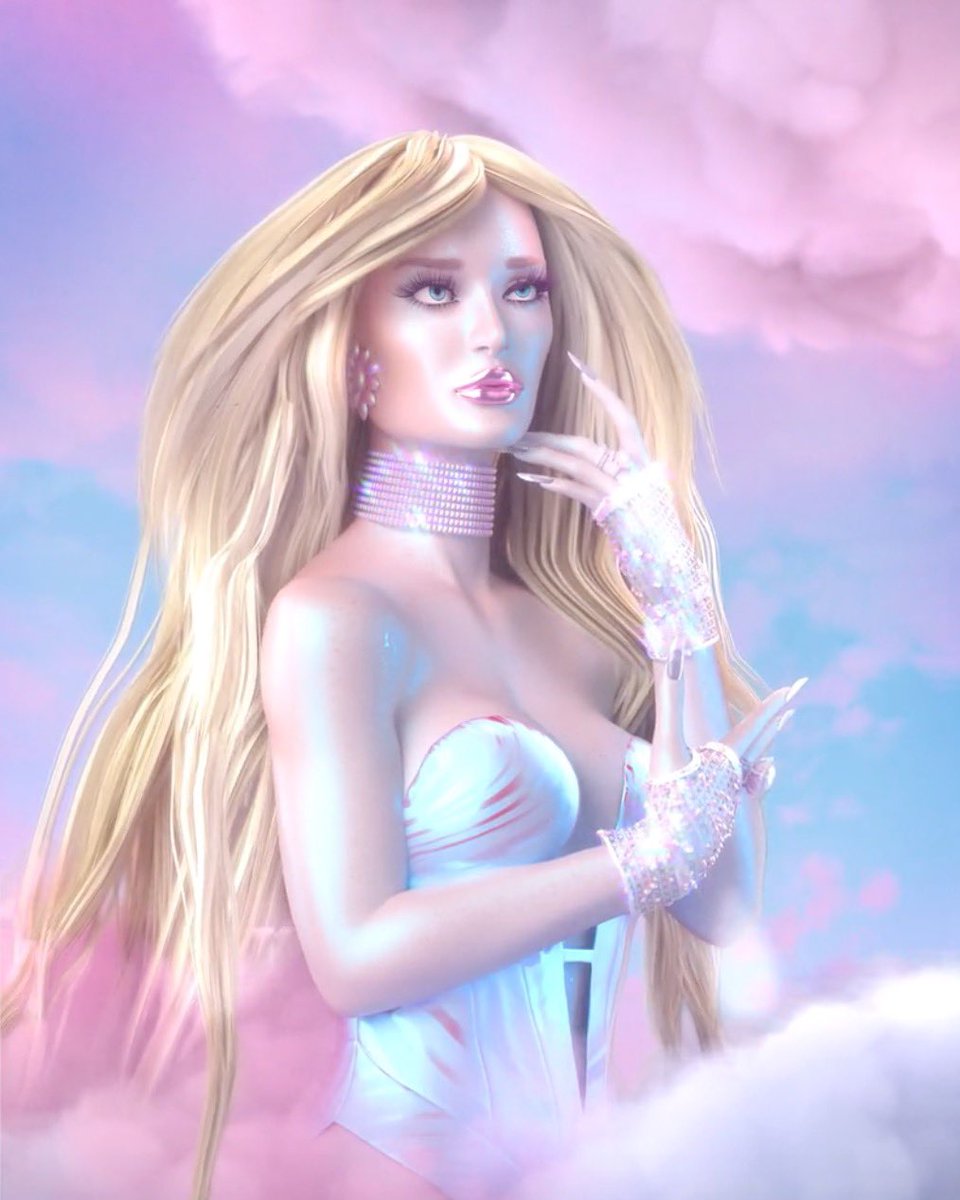 Eight of the top 10 NFT art sales as of March 23 have been bumped from the list.

Paris Hilton and Blake Kathryn, ICONIC CRYPTO QUEEN. Courtesy of the artists.
In March, Artnet News published a list of the most expensive NFT artworks ever sold, topped by Beeple’s $69 million sale at Christie’s. That took place on March 11, catapulting the artist, whose real name is Mike Winkelmann, to number three on the list of most expensive living artists at auction. But while that high-water mark still stands, the rest of the list quickly became outdated, with new NFT artworks continuing to sell for climbing prices in the hundreds of thousands.

But while the exponential growth in NFT sales has struck some as unsustainable, reports that the bubble has burst seem to be premature. Turnover in the all-time top 10 since we first compiled it in March supports that conclusion. The top two sales have retained their positions, but the other eight are all new, with the third, fourth, and fifth most-expensive works falling to 13th, 16th, and 17th places, in less than three months.

The Disaster Girl meme, featuring Zoe Roth, has become an NFT. Photo by Dave Roth.
Further bolstering the case for a continued NFT boom are major sales for a number of other NFTs that don’t quite qualify as artworks. Twitter founder Jack Dorsey sold his first tweet, which launched the popular social media platform, as a $2.9 million NFT. The New York Times published an article, “Buy This Column on the Blockchain,” explaining the phenomenon and minted it as an NFT that went on to sell for $555,289.

Existing internet sensations have also done well for themselves, with memes like Disaster Girl and Overly Attached Girlfriend becoming $401,718 and $417,299.40 NFTs, respectively. The early YouTube hit Charlie Bit Me fetched $761,000 as an NFT.

Larva Labs, CryptoPunk #7523 (2017). Courtesy of Sotheby’s.
And then there are the CryptoPunks #7523, which have started selling at Christie’s and Sotheby’s—four have sold for millions of dollars, led by a masked alien punk that fetched $11.75 million at Sotheby’s first curated NFT sale earlier this month.

When we published our last list, only three NFT artworks had ever topped the million-dollar price point, two by Beeple’s, and Kevin Abosch’s Forever Rose, which sold for $1 million to a group of cryptocurrency investors in February 2018, before the term NFT was even really in use.

FEWOCiOUS, The EverLasting Beautiful by FEWOCiOUS. Courtesy of the artist.
As of June 16, cryptoart.io lists no fewer than 17 NFT artworks clocking in at $1 million or above (not including Forever Rose, which wasn’t sold on a platform tracked by the site). Teen NFT phenom FEWOCiOUS’s The EverLasting Beautiful by FEWOCiOUS, which rounded out our top 10 with a $550,000 sale, has fallen to number 31 there. (He’ll likely rebound with his upcoming Christie’s sale of NFT artworks inspired by his gender transition.)

Ranking NFT sales, however, is complicated by the fact that the value of Ethereum is constantly fluctuating—something that our initial list did not take into account. This time around, our list is based on the conversion value of Ether at the time of the sale.

With all that in mind, here is a list of every single-edition NFT artwork that has sold for at least $1 million to date.

Perhaps the artist on the list with the most traditional art world presence—you may have spotted his gummy bear mug shots at art fairs like Scope—Whisbe made his biggest NFT sale with a riff on Damien Hirst’s golden mammoth skeleton sculpture, Gone but Not Forgotten, on view at Miami’s Faena Hotel.
13. Kevin Abosch, Forever Rose
$1 million, February 2018, GIFTO

Kevin Abosch, Forever Rose (2018). At the time of its $1 million sale on Valentine’s Day in 2018, the piece was the world’s most expensive piece of NFT art. Courtesy of the artist.
Kevin Abosch got some press for selling $1 million dirt-covered photograph of a potato in 2016, but no one in the Artnet News office knew quite what to make of the press release for his sale of a digital artwork of a rose on Valentine’s Day in 2018. Even crypto art’s early adopters weren’t using the term NFT yet! Today, the sale seems like it was a harbinger of things to come.

Paris Hilton and Blake Kathryn had a sold-out NFT drop on Nifty Gateway, including ICONIC CRYPTO QUEEN. Courtesy of Nifty Gateway.
Heiress and former reality tv star Paris Hilton has become an unlikely but dedicated NFT evangelist, even supporting a foundation that provides grants to artists looking to break into the crypto art space. To sell her own NFT art—accompanied by the tag line “(Virtual) blondes have more fun, right?”—Hilton teamed up with Blake Kathryn, a leading female crypto artist, but still failed to crack the all-male top 10.

DΞSTINATION HΞXAGONIA is an hour-long “audio visual experience” that took 12 months to make, according to its SuperRare listing. The NFT of the sci fi-flavored piece came with hand-crafted box containing a hard drive that supposedly stores the only high-quality copy of a file of the film/concert, “making it a truly unique art piece.”

DJ and electronic musician Justin David Blau, stylized as 3LAU for his stage name, achieved $11 million in NFT sales in a March drop marking the three-year anniversary of his album Ultraviolet, led by the animated artwork and music video Gunky’s Uprising.

Pak, The Pixel. Courtesy of Sotheby’s and the artist.
Before Beeple’s, there was Pak, the anonymous artist who began dropping NFTs in February 2020. When Sotheby’s looked to follow up Christie’s explosive Beeple’s sale, it turned to Pak, who didn’t disappoint. A 90-minute bidding war broke out over The Pixel, a literal one-by-one gray pixel—the most basic unit of a digital image—representing the arrival of digital art on the traditional auction house scene.

Pak's The Switch (2021) sold for $1.4 million with 10 bidders chasing. Courtesy of Sotheby’s and Pak.
Pak's most expensive work to date, also from his Sotheby’s sale, is meant to represent the way art is evolving in the digital realm. The owner has the option of triggering “the switch” to change the artwork to a new, unknown image—but doing so is irreversible.

Kevin McCoy, Quantum (2014). Courtesy of Sotheby’s.
The first NFT ever minted, Kevin McCoy's Quantum came out of Rhizome’s Seven on Seven Conference in 2014, when the artist and technologist Anil Dash were the first to have the idea of putting unique digital artworks on the blockchain. Made entirely with code, the animated Quantum is a shapeshifter, generating new forms on its own.

London-based crypto-art pioneer XCOPY has been minting NFTs on SuperRare since the platform’s earliest days in 2018. His piece Death Dip was only the 14th NFT offered on the site, and now stands as its most expensive. (XCOPY got 10 percent of the resale price per the SuperRare contract.) The buyer, who goes by the handle 4156 Collection, named after a CryptoPunk it owns, praised XCOPY on Twitter after the sale as “the most important living artist,” and plans to feature him heavily in a forthcoming crypto art website, according to Metaversal. XCOPY is also headlining an NFT auction at Bonham’s curated with SuperRare running June 21 to June 30, which is being billed as the first collaboration between a digital art platform and a traditional auction house.

Michah “Mad Dog Jones” Dowbak became the most expensive living Canadian artist with his auction debut at Phillips earlier this year, marking the house’s first foray into the world of NFT art. His piece, Replicator, is unique in that it will generate new NFTs every 28 days—sort of like the old-school photocopier it depicts. The buyer could ultimately own between 180 and 220 unique NFTs, each of which has its own resale value.

Edward Snowden NFT artwork features the court documents deciding that the National Security Agency’s mass surveillance practice violated the law, with his portrait by Platon overlaid above the text. The proceeds went toward the whistleblower’s Freedom of the Press Foundation.

Noted NFT collector Justin Sun just missed out on the Everydays auction as the lot’s underbidder, but snapped up this Beeple work mere weeks later. One of the drawings from Beeple’s “Everydays” series, Ocean Front is meant to be a warning of the dangers of climate change, with the artist promising to donate the proceeds to the charity the Open Earth Foundation.

Beeple, Crossroads (2020). Courtesy of the artist.

The original buyer didn’t know which work of art he would actually receive with his $66,666.66 purchase of Crossroads at Beeple first NFT sale, “The First Drop,” in October 2020. There were two possible images, depending on the outcome of the U.S. presidential election. After the votes were tabulated and the piece was finalized, to show a defeated President Donald Trump lying naked and covered in graffiti on the roadside, the collector flipped it for 100 times more the original sale price.

Beeple, Everydays—The First 5000 Days NFT, 21,069 pixels x 21,069 pixels (316,939,910 bytes). Image courtesy the artist and Christie’s.
It seems unlikely that other NFT artworks will be able to match the mammoth price point achieved by Beeple’s Everydays—The First 5000 Days at Christie’s, but if this volatile new marketplace has taught us anything, it’s to expect the unexpected.
Arts

CryptoPunk #5217
The CryptoPunks are 10,000 uniquely generated characters. No two are exactly alike, and each one of them can be officially owned by a single person on the Ethereum blockchain. Originally, they could be claimed for free by anybody with an Ethereum wallet, but all 10,000 were quickly claimed. Now they must be purchased from someone via the marketplace that's also embedded in the blockchain.

KittyPie
*hissing noises*! I'm KittyPie. All you need to know about me is I hate ice cream with a passion. I once got in a fight with a rhino, and won. Can you make my gullible dreams come true?