Quidverse just released its first-ever collection of non-fungible tokens (NFTs). The limited-edition NFT drop was inspired by one of the greatest moments in sports — the iconic Muhammad Ali vs. Sonny Liston boxing match. 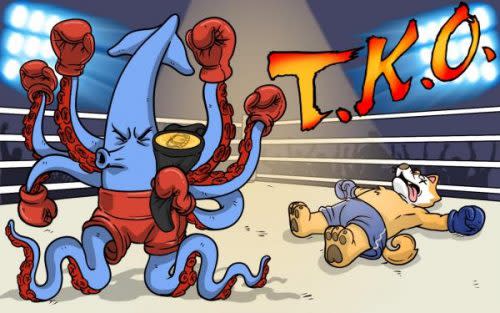 In anticipation of their ‘Quidverse’ game that’s in development, the Quidverse community behind the Quid Ika crypto token just launched their first collection of 1,000 limited-edition NFTs called TKO Tentacle Knockout. This collection was illustrated by a world-renowned designer who has asked not to be named, but what can be said is that the artist is known for their unique style and has worked with some of the world’s largest entertainment companies. The company expects its NFTs to be in extremely high demand, as each NFT will serve as a key to the Quidverse.

The NFT crypto art will depict a reimagining of one of the greatest moments in sports history, which was the epic two-match blood fight between Muhammad Ali and Sonny Liston. Considered as one of the most controversial fights in history, the Championship tournament remains a highly talked-about match between two of the world’s greatest boxers.

The NFT art alone is a testament to the quality that the community has come to expect from the team. With high expectations and attention to detail, the team and community are excited for the major plans in 2022 and beyond. TKO NFTs can be minted for 0.25 ETH each, gas fee not included.

When asked about the NFTs, the Quidverse team said, “These NFTs are more than just amazing artwork. There is real utility tied to these NFTs and it will serve as the key to the Quidverse. TKO holders can expect to receive additional benefits just for being a part of this awesome community and we’re glad to be on this journey with all of our supporters.”

The company explains that once someone owns one of these NFTs, they can expect exclusive access, rewards, staking, and other perks down the road once the Quidverse game is released. Teasing the public with what these can be, the Quidverse team says that rewards could be related to receiving free or discounted goods and services, access to premium features in the Quidity app, access to free mints of other NFT launches, unlocking of special abilities and customizations within the game, merch drops, and more.

The Quidverse team’s mission is to bring a one-of-a-kind experience to the crypto metaverse. By generating revenue through its Quidity app, NFTs, launchpad, and Quidverse game that is in development, their goal is to create a streamlined experience that gets people engaged in the world of crypto and crypto gaming.

Goat
Hey, who's in charge here? This collaboration between Beeple and Peter France was created using Cinema 4D, Bellus3D for the heads, Octane Render, and Adobe Photoshop.