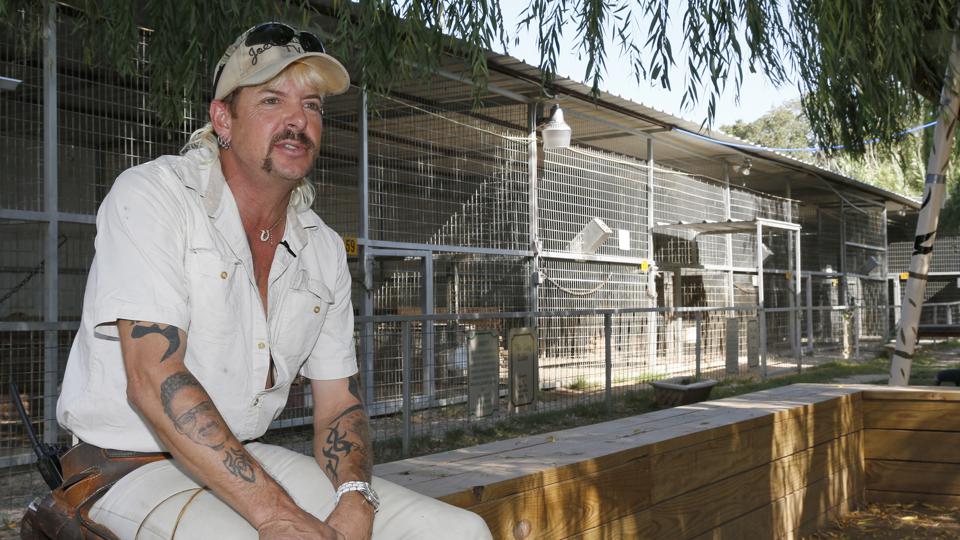 TOPLINE Joseph Maldonado-Passage—more commonly known as the star of Netflix’s “Tiger King,” Joe Exotic—is the latest viral sensation to cash in on the non-fungible token (NFT) craze, auctioning off a suite of digital and physical assets from federal prison, including autographed photos, an adult film star’s bikini and his Smith & Weston pistol.
KEY FACTS

Exotic, a former zoo operator and big cat collector serving a 22-year sentence for numerous wildlife violations and plotting to kill his rival Carole Baskin, is launching his first NFT collection from his cell in Fort Worth, Texas.
The digital tokens are due to go under the hammer Friday on NFT marketplace Mintable, with winners of some auctions set to receive physical items along with the digital artwork.
PROMOTED

Exotic’s pistol, a fringed leather jacket and a bikini worn by adult film actress Rachel Starr on the “Tiger King” show are all set to be posted to the auction winner.
Some NFT’s will also feature audio recordings of Exotic from prison.
In a press release, Exotic said being able to auction off his collectibles makes him “feel connected with the outside world, especially without my cats by my side.”

“Whether you love me or hate me for what you think I’ve done, there’s no doubt that everyone wants a piece of The Tiger King!” Exotic said.

NFTs have exploded in popularity in recent years and have become a lucrative source of income for viral stars. “Tiger King,” in which Exotic starred, was undoubtedly one of the biggest hits of the early pandemic, drawing in millions of housebound viewers around the world. Exotic is not the only “Tiger King” star to cash in on the fame: Carole Baskin, the rival Exotic is in prison for plotting to kill, has appeared on Dancing With The Stars and launched her own cryptocurrency and NFTs.

Exotic reportedly sent Jeff Lowe, another person who appeared on “Tiger King,” a cease and desist over plans to host an “official” “Tiger King” NFT auction.

$4 million. This is how much an NFT of the original Shiba Inu dog meme Doge—the inspiration for the cryptocurrency—sold for in June. One of Exotic’s digital artworks features him with a cartoon version of the dog.
Arts

CryptoPunk #2066
The CryptoPunks are 10,000 uniquely generated characters. No two are exactly alike, and each one of them can be officially owned by a single person on the Ethereum blockchain. Originally, they could be claimed for free by anybody with an Ethereum wallet, but all 10,000 were quickly claimed. Now they must be purchased from someone via the marketplace that's also embedded in the blockchain.