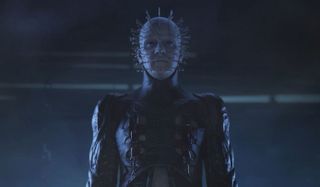 Non-fungible tokens are basically digital items that use blockchain technology to grant "ownership" to those who pay for them. Ownership is in scare quotes, because you really only own a sort of receipt that says a non-unique digital file is yours. It's an extremely divisive phenomenon, partly because creating NFTs requires environmentally damaging, energy-intensive blockchain mining, and partly because the scene isrife with scams. That hasn't stopped their proliferation, and it hasn't stopped Dead By Daylight studio Behaviour from licensing its in-game models for NFTs. Specifically: You can now buy a Pinhead NFT.

Not film Pinhead or anything: Dead by Daylight Pinhead. It's the character model that you can interact with in the actual game, and which is viewable via thousands of images found on Google. The innovation here is that now you canpayfor it and in theoryownit, which you could have done anyway,using your imagination. Buying the NFT does not give you any kind of copyright claim after all, which would be a more convincing indication of ownership. Not only that, but the Pinhead NFT grants "a chance" to access the Hellraiser chapter of Dead by Daylight—though it's not guaranteed, which is bizarre. Possibly because this NFT just isn't actually worth shit.

In the relevantFAQ, Boss Protocol quietly strips away any sensible reason to buy this NFT, assuring that no game content will be locked behind it (or any other Boss Protocol NFTs), though "certain Pinhead NFTs will unlock access to Hellraiser collectibles and all of them will entitle their owners (on a future date) to additional NFTs… at no cost." So the NFT is good for granting you access to possible other NFTs.

Boss Protocol is the company responsible for the NFTs' creation, and while it is a separate entity from Boss Team Games—which manages game rights to Hellraiser, and licenses it to Behaviour—they're closely related: They share the same logo and address. Boss Protocol is working on other NFTs in "other properties in film, gaming, music and traditional media."

Dead by Daylight fans aren't pleased, because most people agree—including Valve, seemingly—that NFTs are extremely prone to scam operations. A former programmer on the game has announcedhis oppositionto the move.

Shaun is PC Gamer’s Australian editor and news writer. He mostly plays platformers and RPGs, and keeps a close eye on anything of particular interest to antipodean audiences. He (rather obsessively) tracks the movements of the Doom modding community, too.
Страница 2 из 2 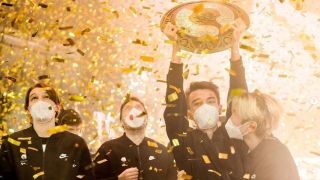 Moscow-based Team Spirit claimed the crown atThe International 2021this weekend, earning a prize payout of more than $18 million in the process—the biggest in esports history. The team also got an official letter of congratulations from Russian president Vladimir Putin.

"Congratulations on your well-deserved victory at The International-2021—the Dota-2 World Championship," Putin wrote in a message posted atKremlin.ru(viaGoogle Translate). "For the first time in history, the Russian team of the Team Spirit club won these prestigious competitions. Well done!

"On the way to the final, you demonstrated outstanding leadership qualities and solidarity, and in the decisive duel, which became a real test of skill and character, you managed to concentrate and seize the initiative from strong opponents at the most crucial moment. They have proven in practice that our esportsmen are always goal-oriented and capable of conquering any peaks."

Team Spirit is the first team from Eastern Europe to win The International in a decade—since Ukrainian team Natus Vincere (Na'Vi) won the first-ever International in 2011, in fact. That makes the win a pretty big deal in its own right, but it was also a very hard-fought battle: Team Spirit blew a 2-0 lead over Chinese team PSG.LGD but pulled off a win in the fifth and final game to seal the victory.

Putin's public congratulations adds an example to the case that mainstream esports recognition is growing, and it's also part of a long history of major powers using sporting events to reflect national glory. The US and USSR were the biggest players of the 20th century—the1972 Olympic basketball finalbetween them remains one of the most infamous events in international sports history—but smaller nations play the game too: TheCanada/Soviet hockey seriesthat took place the same year is still treated with nearly religious reverence in my home country. (Of course, Americans have their own locallyfamous USSR hockey game, because they just have to have one of everything.) The International isn't quite as high up in the public consciousness as those events were, but a win is a win—and among younger, esports-savvy Russians especially, Team Spirit's victory was a big one.

Andy has been gaming on PCs from the very beginning, starting as a youngster with text adventures and primitive action games on a cassette-based TRS80. From there he graduated to the glory days of Sierra Online adventures and Microprose sims, ran a local BBS, learned how to build PCs, and developed a longstanding love of RPGs, immersive sims, and shooters. He began writing videogame news in 2007 for The Escapist and somehow managed to avoid getting fired until 2014, when he joined the storied ranks of PC Gamer. He covers all aspects of the industry, from new game announcements and patch notes to legal disputes, Twitch beefs, esports, and Henry Cavill.Lotsof Henry Cavill.

Darky
Ugh! I'm Darky. My friends describe me as smelly and voluptuous. My secret indulgence is cantaloupe. Will you be the garlic butter to my peanut butter?