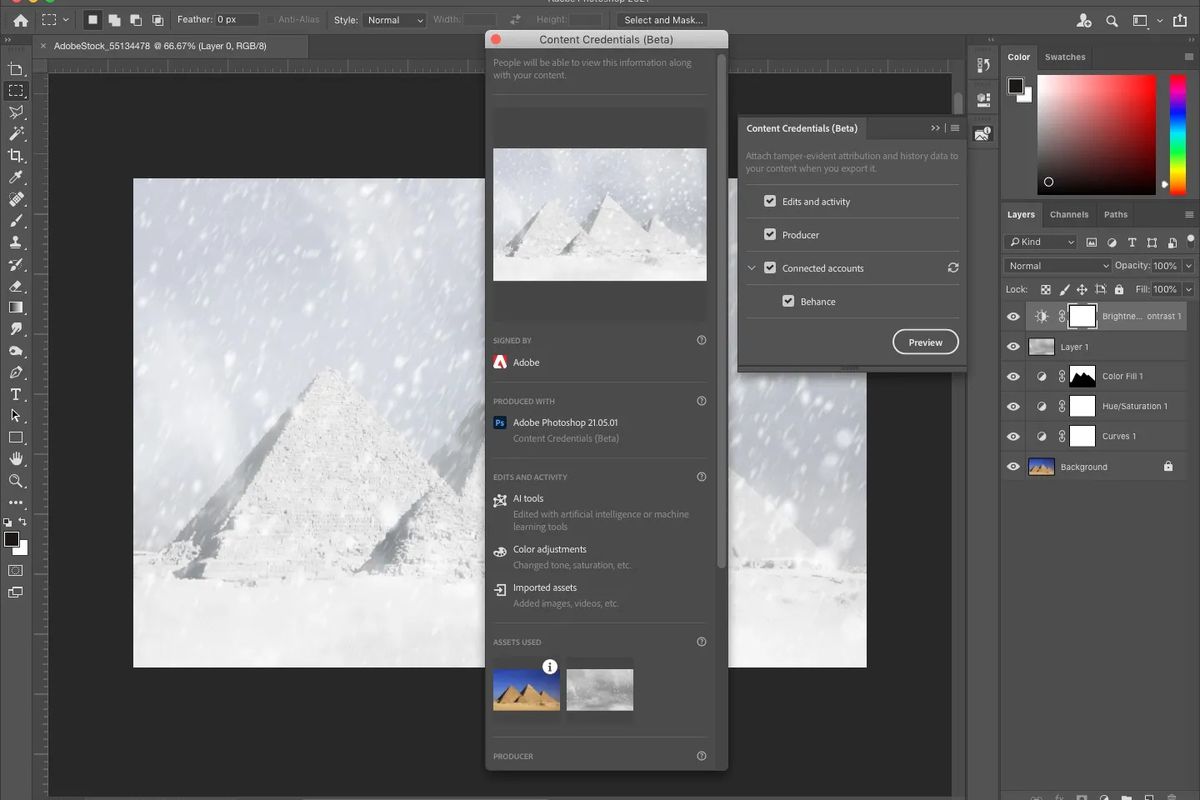 Adobe is launching a system built into Photoshop that can, among other things, help prove that the person selling an NFT is the person who made it.It’s called Content Credentials, and NFT sellers will be able to link the Adobe ID with their crypto wallet, allowing compatible NFT marketplaces to show a sort of verified certificate proving the art’s source is authentic.

According toaDecoderinterview with Adobe’s chief product officerScott Belsky, this functionality will be built into Photoshop with a “prepare as NFT” option, launching in preview by the end of this month. Belsky says attribution data created by the Content Credentials will live on an IPFS system. IPFS (InterPlanetary File System) isa decentralized way to host fileswhere a network of people are responsible for keeping data safe and available, rather than a single company (somewhat similar to how torrent systems work). Adobe says that NFT marketplaces like OpenSea, Rarible, KnownOrigin, and SuperRare will be able to integrate with Content Credentials to show Adobe’s attribution information.

Top 4 Reasons to Own Cypherpunk NFT Now
Funganomics Completes Its First Seed Investment Round to Accelerate Development of the NFT and Gaming Ecosystem
Are NFTs Revitalizing the Art Market?

NFTs allow you to buy and sell ownership of unique digital items and keep track of who owns them usingthe blockchain. NFT stands for “non-fungible token,” and it can technically contain anything digital, including drawings, animated GIFs, songs, or items in video games. An NFT can either be one-of-a-kind, like a real-life painting, or one copy of many, like trading cards, but the blockchain keeps track of who has ownership of the file.

NFTs have been making headlines lately, some selling for millions of dollars, with high-profile memes likeNyan Catand the“deal with it” sunglassesbeing put up for auction. There’s also a lot of discussion about the massive electricity use andenvironmental impactsof NFTs.If you (understandably) still have questions, you can read throughour NFT FAQ.

Art theft has been a Big Deal in the NFT world. There have been many examples of people minting artthey didn’t createordon’t have the rights toon the blockchain. The reason is that anyone can mint an NFT, even if they don’t own the copyright to the content, and there’s not really anything the blockchain can do to stop that. Worse, the minting is enshrined on the blockchain, making the NFT’s creation seem authentic if you’re unaware of the original work.

This system doesn’t make it harder to mint an NFT of media you don’t own the rights to, but it could make that NFT less attractive to the market

In other words, I could right-click on an existing image of an NFT and mint it again myself, potentially fooling unaware buyers. While Adobe’s system won’t prevent art theft, it does offer a way to prove that the NFT you’re selling isn’t stolen — past that, it’s up to buyers to decide how much value they place on that.

Even Banksy, who gets a mention inDecoder, has been caught up by NFT scammers. One NFT collector (ironically named Pranksy) paid $300K for an NFT attributed to the famous street artist,which was almost definitely fake. He ended up getting the money back, but there wouldn’t have been as much of a fuss if Banksy had digitally signed the NFT. As Adobe’s Belsky points out, Banksy probably wouldn’t want to link his name and Adobe ID to a crypto wallet, but the system is meant to be open-source — it’s possible the anonymous artist could figure out some way to provide Content Credentials verified bythe company in charge of authenticating his work.

NFTs aren’t the only thing that will benefit from Adobe’s Content Credentials, which are a result of itsContent Authenticity Initiative. The company is launching the system as a beta, and users can use it to show what edits were made to a file in Photoshop, tag their stock images on Adobe’s system, and more.

To hear more about Adobe’s view on NFTs, the impact of certified attribution on art and NFTs, and Photoshop on the web, check outthis week’s episode ofDecoderand the rest of our coverage from Adobe’s Max conference.

Ringers #686
There are an almost infinite number of ways to wrap a string around a set of pegs. On the surface it may seem like a simple concept but prepare to be surprised and delighted at the variety of combinations the algorithm can produce. Each output from 'Ringers' is derived from a unique transaction hash and generated in Javascript in the browser. Feature variations include peg count, sizing, layout, wrap orientation, and a few colorful flourishes for good measure. Additional project feature(s) => Background: White, Size: Normal, Wrap orientation: Off-center, Wrap style: Weave, Peg layout: Recursive grid, Peg scaling: Uniform, Body: Yellow, Peg style: Solid, Extra color: Red, Peg count: 15

CryptoKitties
Hey cutie! I'm Kitty #446887. My friends describe me as gullible and despicable. I put pickles on everything. Like, everything: hot dogs, ice cream—everything! We can be friends, but keep the ultra purrsonal stuff to yourself, please.