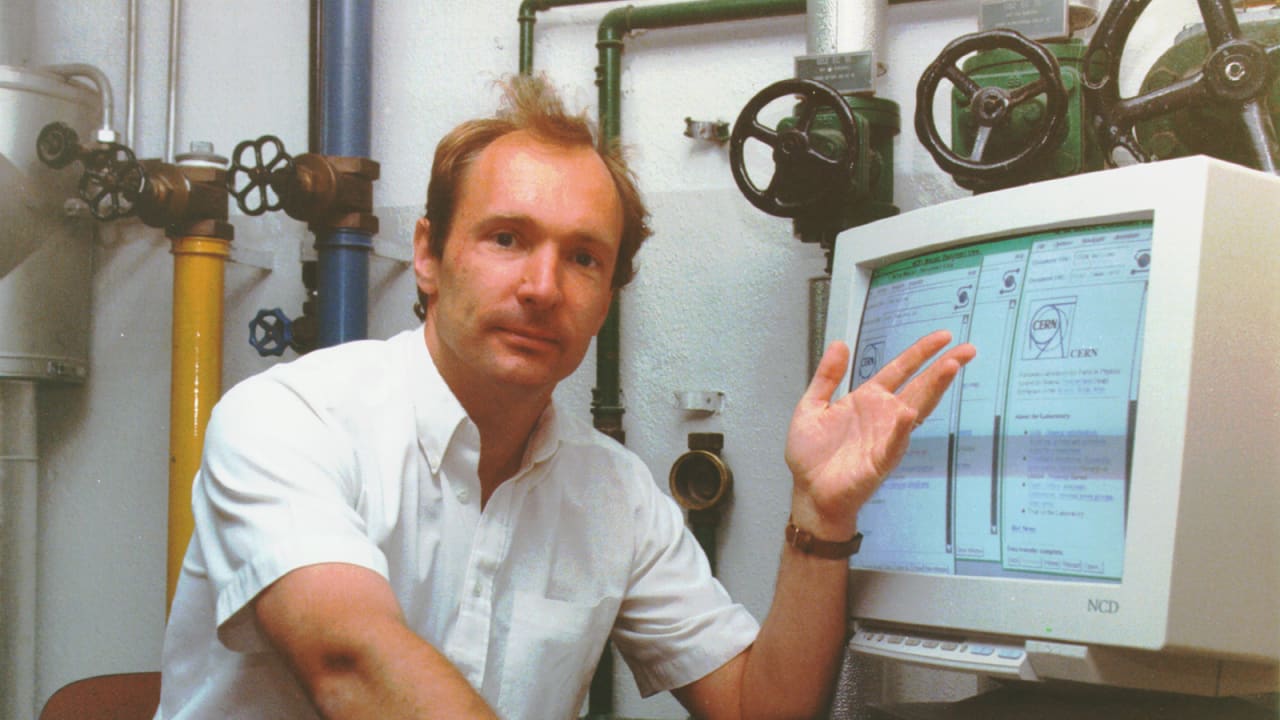 Tim Berners-Lee, creator of the World Wide Web, is auctioning off his invention's source code as an NFT.
Although the groundbreaking code has long been in the public domain, the British computer scientist has now authorized the sale of a single edition of his original time-stamped files.
Comprising over 9.500 lines of code, the files contain the basis of the languages and protocols underpinning the internet as we know it: Hypertext Transfer Protocol (HTTP), Hypertext Markup Language (HTML) and Universal Document Identified (URI).
They are being sold alongside an animated visualization of the code and a digital "poster" that is "signed" by Berners-Lee via a graphic signature. The winning bidder will also take home a letter, written by the computer scientist, in which he reflects on the code and its creation.

"It has been fun to go back and look over the code," the letter reads. "It is amazing to see the things that those relatively few lines of code, with (the) help of an amazing growing gang of collaborators across the planet, stayed enough on track to become what the web is now.
"I have never once felt I could relax and sit back -- as the web was and is constantly changing," Berners-Lee signs off. "It is not yet the best it can be: there is always work to be done!"

Although the world's first web page didn't go live until 1991, the birth of the World Wide Web is usually considered to be 1989, the year that Berners-Lee submitted a manuscript entitled "Information Management: A Proposal" at CERN, a particle physics research laboratory in Switzerland.
Initially designed to help scientists collaborate, his invention soon expanded beyond the academic world. There are now over 4.6 billion active internet users in the world.
Sotheby's, which is organizing the sale, described the code as the "first digital-born artifact" ever to come to auction. The auction house's global head of science and popular culture, Cassandra Hatton, said the sale offered a chance to "own" part of a technological development that heralded a "paradigm shift" for humankind.
"I've been trying to come up with something comparable," she said on the phone from New York. "I thought maybe the theory of relativity, heliocentrism, the printing press, light bulbs or the combustion engine. But I think that this is a much bigger thing.
"Light bulbs were an improvement on candles, the combustion engine as an improvement of steam engine, but with the World Wide Web, it was something entirely new."

A 'completely digital artifact'
Based on blockchain technology, NFTs, or non-fungible tokens, have have revolutionized digital art and collectibles by offering proof of ownership. The tokens have made it easier to buy and trade digital assets that could otherwise be easily copied, such as tweets or photographs.
Berners-Lee's code has been publicly available since 1993, but Hatton believes that the chance to own the "original files" makes this NFT like other high-value historical collectibles.
"I look at it from the lens of somebody who's been a books and manuscripts specialist for almost two decades," she added. "The existence of paperback does not devalue the first edition, and the existence of the first edition does not devalue the existence of the manuscripts.
"It's the same with paintings: How many posters of Van Gogh's 'The Starry Night' are there out there? They do not devalue the painting at all."

Berners-Lee, who was knighted by Queen Elizabeth II in 2004, said in a press statement that NFTs represent "the most appropriate means of ownership that exists" for his pioneering code.
"Why an NFT? Well, it's a natural thing to do as when you're a computer scientist and when you write code and have been for many years," he is quoted as saying. "It feels right to digitally sign my autograph on a completely digital artifact."

Bidding will open at $1,000 on June 23, and the auction will run online until the end of the month. As with all of Sotheby's NFT sales to date -- including 28 digital artworks that sold for a combined $17.1 million last week -- the auction house declined to offer an estimated price for Berners-Lee's code.
Given NFTs limited history on the market, Hatton said it would likely "be a while" before auctioneers can provide accurate valuations for NFTs market. But she predicted that the buyer would likely be someone "who has lived through the paradigm shift" brought about by the web's arrival.
"To really appreciate this invention," she added, "you have to understand what it was like before."
Arts

Auto-Erotic Sphinx with Toys
In this image, a giant sphinx spoons itself in erotic play within an aquatic styled environment littered by various denizens. These creatures include symbols and archetypes both current and nostalgic–each inhabiting a rootedness within mass cultural adolescence. Among the roster are Servbots, video game inspired mushrooms, a Pacman-like creature, a distant sea faring rubber duck, creatures sporting the symbols reminiscent of popular anime, and a Pokemon-like rabbit (a novel incarnation of Ganesha indicated by the Shiva trident on its nose). In addition, a few sea creatures partly inspired by sea monsters of western antiquity conglomerate along the mid left side of the composition. The Sphinx itself is an amalgam of aquatic, fetishist, ancient Egyptian, and 80’s style adornments, both living, as in a clown fish, or material, such as a cassette tape. Nautically colored antennae receive somatic signals from the atmosphere, perhaps from the 8 Ball moon or giant ringed planet beyond.

Coffin Dance (Dancing Pallbearers)
The most famous global meme of 2020, which has become a true symbol of the COVID-19 pandemic era. The token is issued with the support of the Ukrainian PR community, by Benjamin Aidoo team in collaboration with Matthew “DigiNeko” Ordrick, who in late March 2020 uploaded the video to YouTube which started a trend on the Internet. The owner of this token is going to get good luck for eternity. Format: 690  x  388 GIF