Trading
18 Views
Visit Website
Add to watchlist
My Art has 1 of my 2 autographs, if buyer pays my asking price.

I've been inspired by Eric Clapton, English rock /blues guitarist's style & his songwriting. He's the only three-time inductee to the Rock & Roll Hall of Fame: ~once as a solo artist;--separately as member of the Yardbirds & Cream. He's been referred to as one of the most influential guitarists of all time. E.C. left Yardbirds to play with John Mayall's "Blues Breakers" Then after leaving Mayall, Clapton formed the power trio, "Cream", in which he played sustained blues improvisations & "arty, blues-based psychedelic pop". He formed blues rock band 'Blind Faith' with Steve Winwood, Ginger Baker & Rick Grech.
His solo career began in the 1970s, when his work was influenced by a mellow style of J. J. Cale & reggae tunes of Bob Marley. His version of "I Shot the Sheriff" helped reggae reach many people. Clapton's "Layla", recorded with Derek & the Dominos & Robert Johnson's "Crossroads", with Cream became his signature songs. "Tears in Heaven", became his top selling song & LP, "Unplugged" album. Clapton had received18 Grammy Awards & the Brit Award for Outstanding Contribution to Music. He has received 4 Ivor Novello Awards from the British Academy of Songwriters, Composers & Authors, including the Lifetime Achievement Award. His solo career had Eric sell 130M records worldwide. In 1998, he recovered from alcoholic & drug addiction. E.C. started the "Crossroads Centre/Antigua", for recovering substance users. An amazing guitarist.
read more 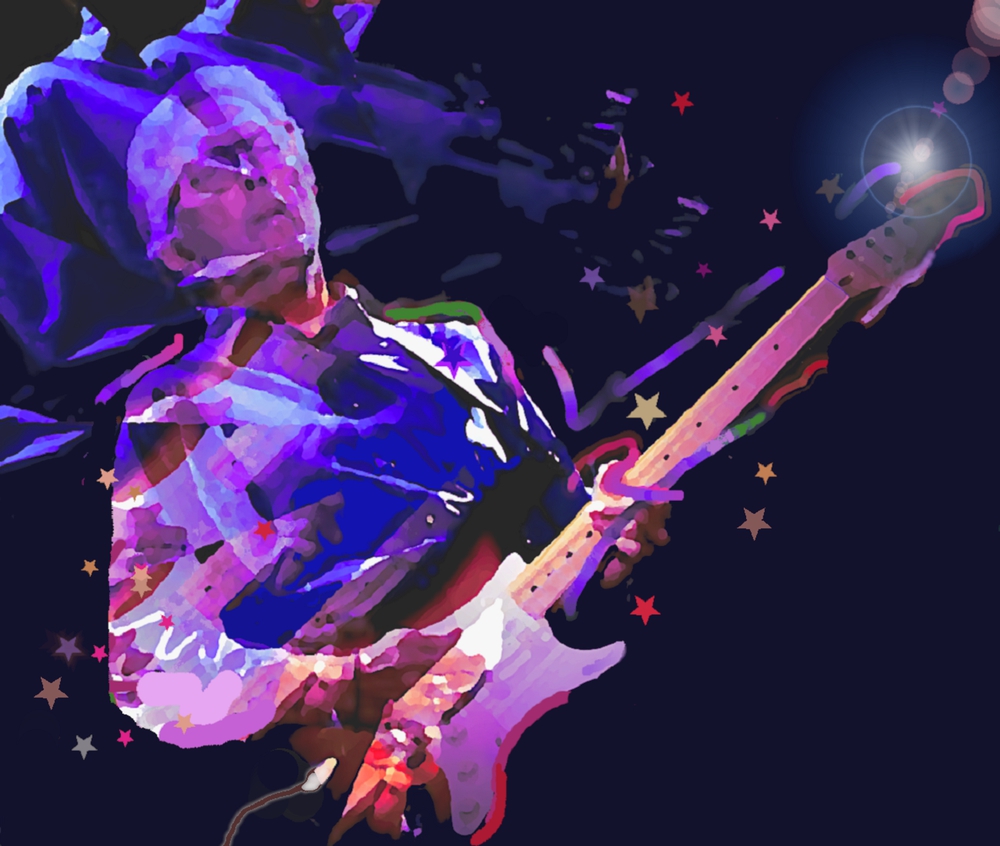 Sold
Forms of Love
The ever changing piece, that took you to understand the 10 forms of love. attach string to each of it,connect and try to understand it. how do you perceive it? it's up to you, it's part of me but also part of you at the same time. just don't use logic too much, we never live there anyway from the start.

Sold
Fuku-Shiva
The term “Fuku” refers to fortune or good luck. “Shiva” refers to the Hindu deity who represents strongly polar qualities, both severe and delicate. On a beach inspired by adventures on Phi Phi island in Thailand, three youths cavort. Two are representational figures and the third is psychologically rendered. A dynamic relationship ensues between the triad; a reciprocity of active and passive states. The boy on the right engages in maneuvers of evasion, defense, and is dressed in a speedo which reiterates the colors and symbolism of the caution tape on the left and upper right frame of the composition. In concurrent reaction the psychedelic figure shoots out a rocket powered paper airplane. The nude boy seated in the froth and sand approaches in passive repose, and is met with active attention but equal physical reserve by the psychedelic being. Perhaps the most naked figure is also the least representational. Looming large, dynamic, and active, it engages its companions playfully. Various symbols interject into the otherwise naturalistic scene, most notably a beach ball and two contaminated barrels nested in the sand. The upright barrel reads “FukuShima” in Kanji. The barrel laying down reads “Dharma”. To the left the scene is bounded by caution tape, reiterating the danger of the nuclear waste while also hosting alien archetypes, whose presence, as is the nature of these entities, runs up and just behind the consciousness of the psychedelic figure’s eggshell-like skull.

Sold
Brave Samurai
This is the second collaborative piece that I have created with the very talented Dutch artist, @eattheart23. Here, a samurai warrior stands guard, honour bound to protect his master even to the death.