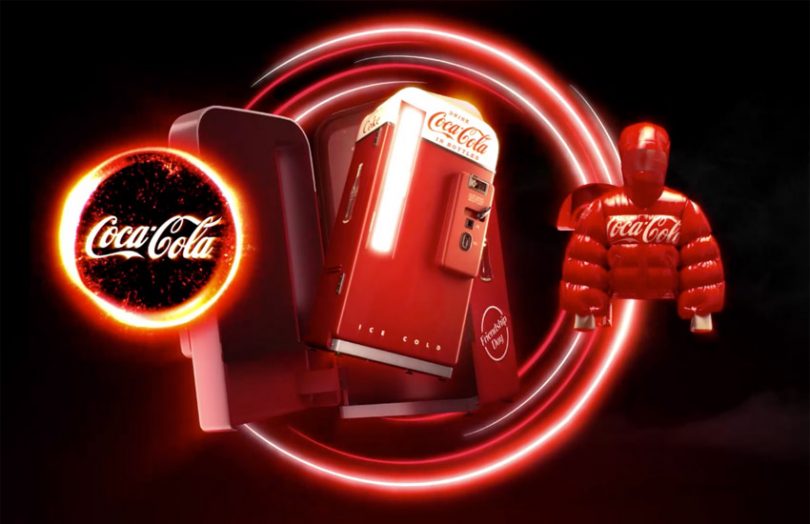 Avatar developer Tafi has partnered with Coca-Cola to launch branded virtual wearables as non-fungible tokens (NFTs), including a ‘wearable’ jacket for avatars in the Decentraland metaverse. This will be Coca-Cola’s first NFT collection and is a celebration of International Friendship Day. Proceeds of the auction will go towards the Special Olympics.

The NFT is a “Coca-Cola Friendship Box” inspired by vending machines. Inside the box there are three unique NFTs: a branded bubble jacket, a sound visualizer (such as the sound of a bottle opening or a beverage being poured over ice), and friendship card inspired by the collectible trading cards launched by Coca-Cola in the 1940s. The boxes include additional prizes to be unveiled when opened.

One feature specific to this NFT launch is that the digital assets can be worn within the virtual world Decentraland. Coca-Cola will even host a “Rooftop Party” on the platform to celebrate the launch.

“Coca-Cola is one of the most collectible brands in the world, sharing its rich heritage with consumers through simple moments of joy for decades,” said Selman Careaga, President, Global Coca-Cola Trademark. “We are excited to share our first NFTs with the metaverse where new friendships are being forged in new ways in new worlds, in celebration of International Friendship Day and in support of our longstanding friend and partner, Special Olympics.”

Meanwhile, Tafi has an avatar creation platform and partners with brands to develop avatars, avatar clothing, and NFT collections. The company has partnerships with Samsung for AR Emoji’s clothing, VRChat for in-chat avatars, and clothing brand Champions for NFTs, among others.

The NFTs launched in partnership with Coca-Cola were developed alongside creative agency Virtue and will be auctioned on marketplace OpenSea for 92 hours beginning on July 30.

This is Coca-Cola’s first use of blockchain to enhance engagement and brand awareness in virtual worlds. Coke One North America (CONA), a company that is independent of Coca-Cola but handles its bottling, has previously used the technology to address logistical matters such as the bottling supply chain. CONA announced last year it was to trial public Ethereum blockchain technology Baseline Protocol, and it invested in digital asset payments platform Centrapay for vending machine transactions.

CryptoPunk #6817
The CryptoPunks are 10,000 uniquely generated characters. No two are exactly alike, and each one of them can be officially owned by a single person on the Ethereum blockchain. Originally, they could be claimed for free by anybody with an Ethereum wallet, but all 10,000 were quickly claimed. Now they must be purchased from someone via the marketplace that's also embedded in the blockchain.

CryptoKitties
Ugh! I'm Kitty #439073. All you need to know about me is I hate wet food with a passion. I once got in a fight with a chimpanzee, and won. In time you'll learn how purrfect I am.