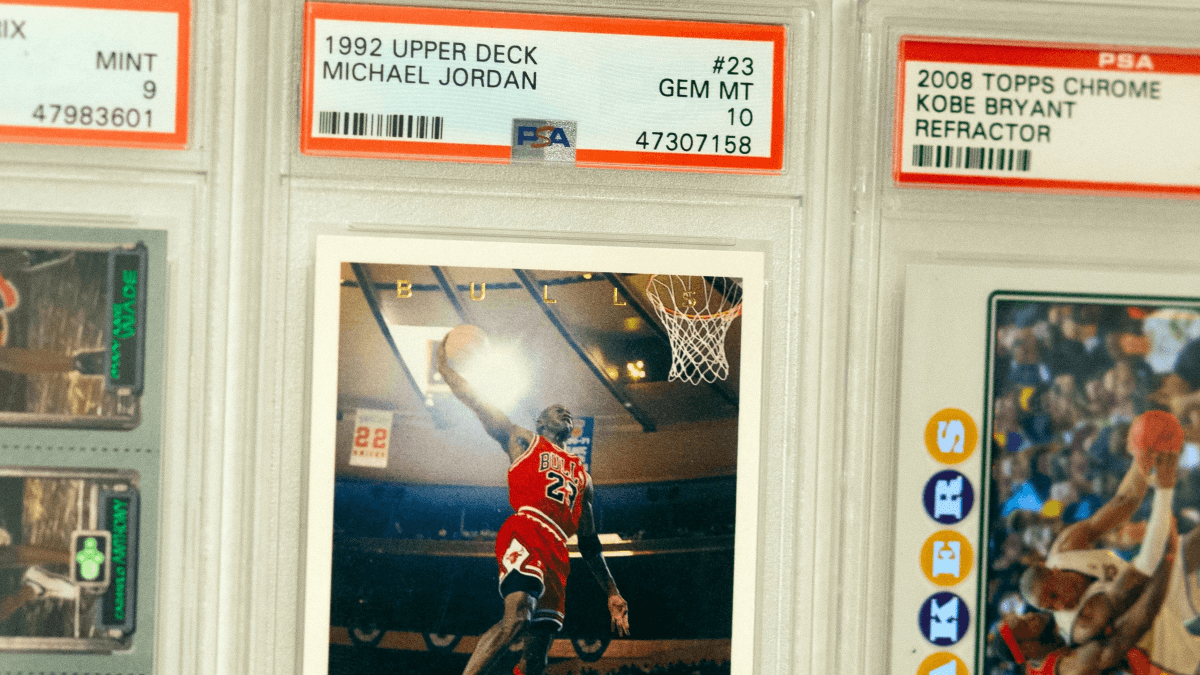 What a year 2021 has been in collectibles.

There have been so many ups and downs, shocking sticker prices for trading cards, big acquisitions and the introduction of the acronym “NFT” to our lexicon.

Let’s break down the year by the top highlights in the sector.

1. The Rise and Fall of the Michael Jordan Rookie

Much of the talk in the card world was how high the Michael Jordan PSA 10 rookie would go. With only 320 in the world, the thought was that after turnover in 2020, that well-heeled investors had most of them, meaning they’d hold and the price would rise.

Part of the rise of the high-end memorabilia industry comes from Rally, Otis and Collectable, companies that allow people to buy into high-end pieces they couldn’t afford on their own. The competition alone for these pieces in a variety of areas — including game used memorabilia, cards, historical documents and video games — boosts the market overall.

3. The Rise and Fall of NBA Top Shot

Nothing was hotter than NBA highlight NFT digital collectibles from Dapper Labs in the beginning of the year. In February andMarch, $432 million worth of Top Shot NFT’s transacted.

The final nine months of the year combined? $350 million.

While Top Shot was the initial NFT with all the buzz, it got overtaken by Cryptopunks and Bored Apes.

Despite absurd amounts graded of modern basketball cards, some of the highest-graded base cards were selling for thousands of dollars each last December. The poster child? The 2018-19 Luka Doncic base Panini prizm rookie, which was approaching $2,000 in a PSA 10 condition last December.

While “The Last Dance” led to a huge rise in Michael Jordan collectibles in 2020, this year brought us another record in sneakers, thanks to the appeal of everything MJ.

For 40 years, the T206 Honus Wagner cigarette card has been the star of the hobby and 2021 was no different. In May, Goldin Auctions sold one version for $3.75 million.

In one of the most stealth moves that seemed impossible for these times, apparel giant Fanatics negotiated long-term card licensing deals with MLB, NBA and NFL and their players unions by giving them equity in a $10 billion new vehicle that had no active product. By making the move, it turned Topps and Panini into lame ducks.

For Topps, it came hours before Mudrick Capital was set to bring the company public. The deal got canceled and it’s assumed that Fanatics will one day buy Topps for a song.

With the bank giving people next to nothing in interest and with rising inflation, 2021 will be the year where cards and memorabilia got recognized as a legitimate place to put your money. To further legitimize the space came the rise of tools and data tracking seen in more mature asset classes by brands such as Card Ladder, Alt and eBay.

As millions and millions of cards came into PSA to get graded, the company — bought for $700 million in December 2020 by entrepreneur Nat Turner, Mets owner Steve Cohen, The Chernin Group and others — just couldn’t keep up.

First came the price increases, then came a total shutdown. The hobby accepted it as a necessary evil and it ended the submitting of every single card to get graded (read: The Junk Slab Era) as prices and speed of delivery returned at higher levels. PSAaddedvideo game grader WATA, Card Latter for expanded data and Genamint to help use artificial intelligence for grading.

Led by sealed and graded video games going for hundreds of thousands of dollars — Rallysold its Super Mario Bros. for $2 million— collectors went into new spaces. Video games, helped by auction house companies including Heritage and Goldin, got the most buzz. But graded comics, sealed old toys, graded tickets and sealed and graded VHS tapes all were added to the conversation.

CryptoKitties
Mahalo! I'm Kitty #454127. All you need to know about me is I hate wet food with a passion. Some people say I'm the Peter Griffin of the group. This will be an amewsing friendship.