On a beach inspired by adventures on Phi Phi island in Thailand, three youths cavort. Two are representational figures and the third is psychologically rendered. A dynamic relationship ensues between the triad; a reciprocity of active and passive states. The boy on the right engages in maneuvers of evasion, defense, and is dressed in a speedo which reiterates the colors and symbolism of the caution tape on the left and upper right frame of the composition. In concurrent reaction the psychedelic figure shoots out a rocket powered paper airplane. The nude boy seated in the froth and sand approaches in passive repose, and is met with active attention but equal physical reserve by the psychedelic being.

Perhaps the most naked figure is also the least representational. Looming large, dynamic, and active, it engages its companions playfully. Various symbols interject into the otherwise naturalistic scene, most notably a beach ball and two contaminated barrels nested in the sand. The upright barrel reads “FukuShima” in Kanji. The barrel laying down reads “Dharma”.

To the left the scene is bounded by caution tape, reiterating the danger of the nuclear waste while also hosting alien archetypes, whose presence, as is the nature of these entities, runs up and just behind the consciousness of the psychedelic figure’s eggshell-like skull.
read more 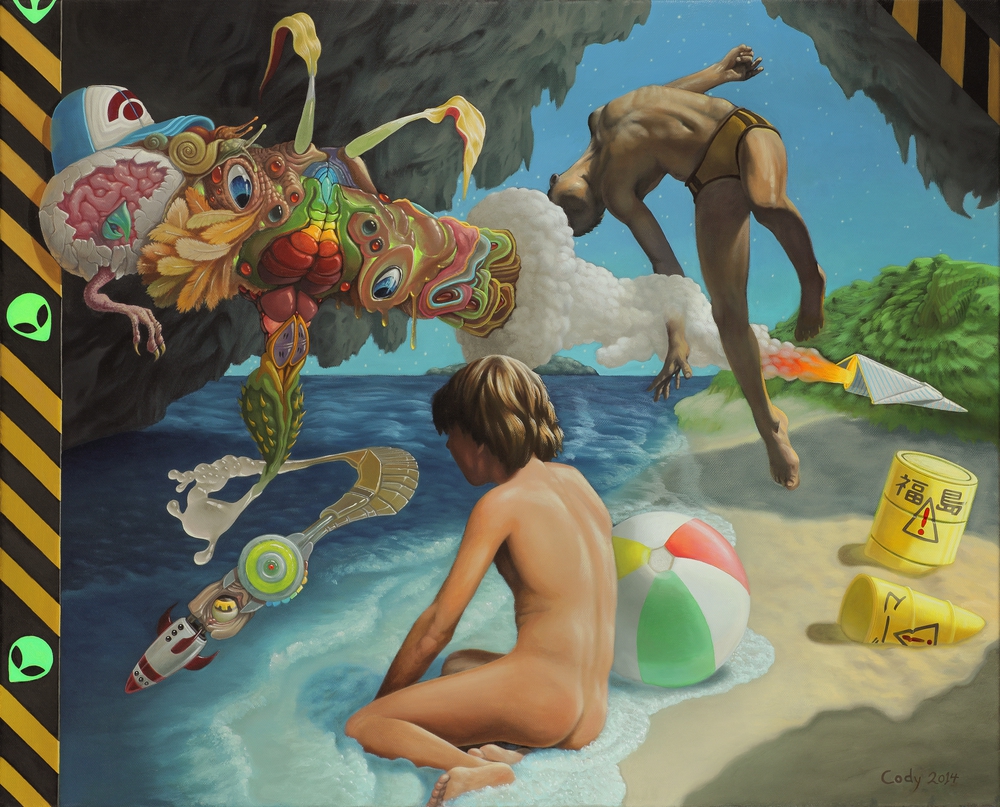 Sold
Candy Girl
Today we are the ones our parents warned us about in the past. Do you remember the colourful PEZ dispensers with the different faces? When we were kids we used to stack candy, and today we stack satoshis because we have a plan B. We stick to this plan because Mahatma Gandhi has already said, "First they ignore you, then they laugh at you, then they fight you, then you win. That is why we are giving the middle finger to the existing system.

Sold
The Scion
A young figure caught in a moment of distraction, aware only ephemerally of his unconscious being, as it engages in psychological and psychedelic layer spaces. His right arm casually cradles a moray eel; the figure is comfortable but not truly aware of the potentials for danger in such negligence. His shirt reads “Bello” in Pokemon style font, harkening back to a childhood straddling the millennial threshold. To his right side, out of the unconscious deep, shrouded alien heads propagate as a fractal totem, each new iteration a more sophisticated rendering of emotional masking over the cold mystery of the greys. As the scion of the Budgie-Sattva, the young man, in his distraction, is also simultaneously aware of higher levels of self discovery. To his left a psychological topology sets beneath the oracle side of an 8 ball ,hovering; its message a purest concept of acceptance. The “Scion” lettering is in 80’s HeMan style bold declaration. The lower right side of the painting is like a hybrid of melon, feathers, and seeds. The crystals in the background bring light; conducted, refracted, reflected, and dispersed, to balance the dark shadow of the figure’s physical body. The aura of the scion succeeds in layers to point, with a finger, and the crown chakra, toward a center of a mandala existing as nigh pure application of strokes, in essence painterly abstraction, but also revealing hints of the Aura of migraine, and the bi-hemispherical nature of the brain–noting concerns of the possibility of inherited mental disease. Yet the flourish of chakra as it sets against that center is robust, active, coherent, and reveling against all fear. Fundamentally, the piece speaks to the activation of one’s potential to begin to “Know Thyself”, and find greater awareness out of the enigmas of the mind–as an inculcated seed given to the rich soil of one’s own birthright.

Sold
Despair
A gothic artpiece glorifying the worst of feelings , materialized by an ornate skull and dark mandalas